Senior RCMP officials intended to push their national intelligence operation to the next level" by having Cameron Ortis in charge, according to an independent analysis after his detention.

Hoping to improve their credibility with foreign allies including the FBI, the RCMP made Ortis National Intelligence Coordinating Center Director-General and ordered him to launch a study.

They also required Ortis, a civilian with a PhD, to use highly classified information to enhance RCMP intelligence quality, the analysis revealed.

But four years later, the attempt to become an international intelligence competitor has fallen flat: Ortis faces trial over suspected violations of security; three of his former employees sue the government for alleged harassment; and an official investigation ordered by the RCMP has blamed senior police officers responsible for the NICC for a "simple breakdown of leadership." 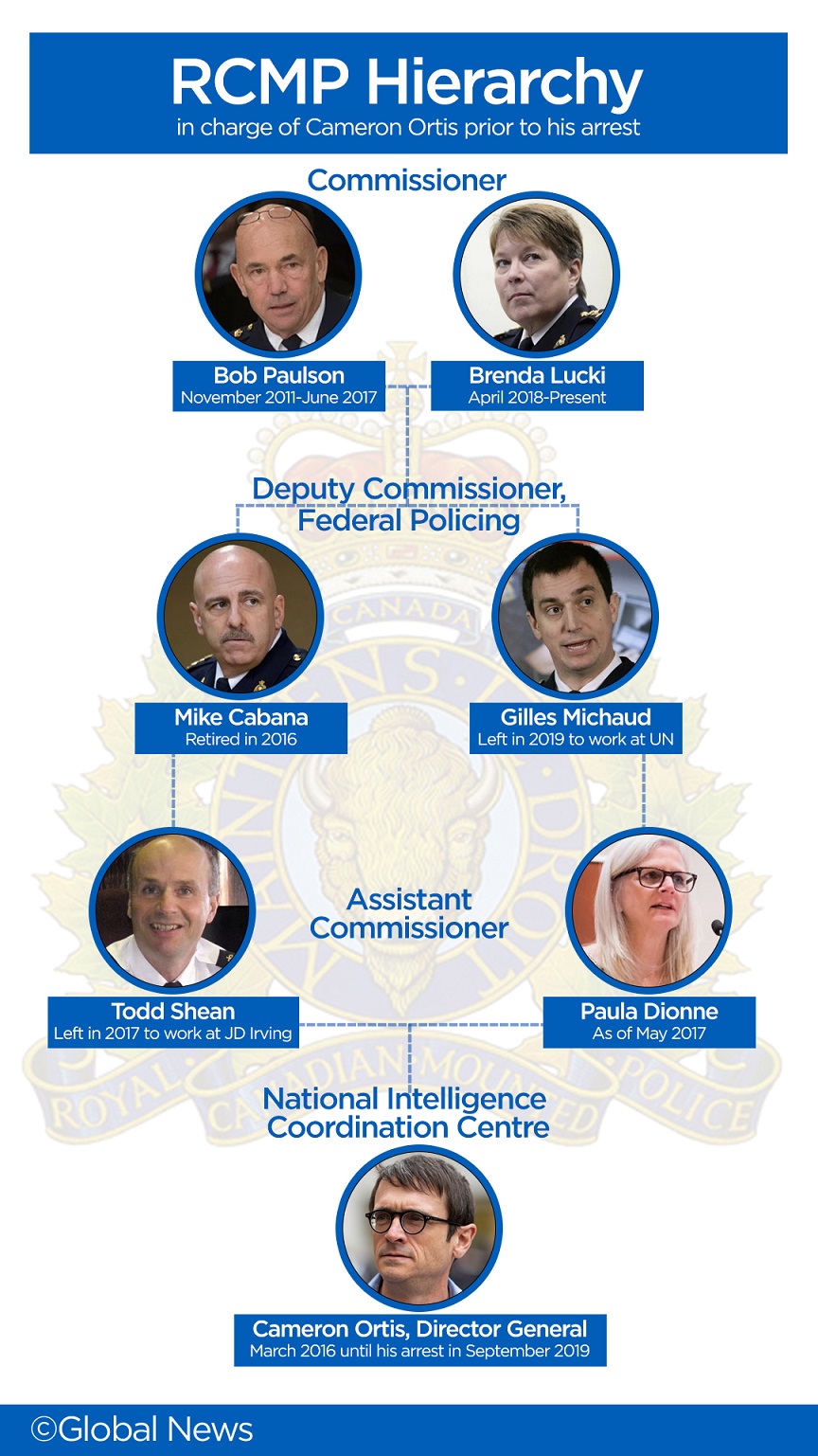 It also shows how senior Mounties put Ortis at the NICC's helm — and kept him there amid persistent reports of intelligence center personnel behaviour.

Arrested in September 2019, Ortis faces eight charges under the Protection of Information Act and a breach of confidence. Crown prosecutors say he disclosed information to an unidentified recipient and intended to send a foreign agency more.

His counsel did not answer a comment letter. No current or former RCMP officers named in the study addressed requests for comments. Similarly, the counsel defending NICC workers did not address Global Press.

An RCMP spokesman said MacNeil's study serves as a helpful guide to better ensure that our practices and processes are aligned and revised to resolve employee and organizational challenges quickly and efficiently."

The report first describes who made Ortis responsible for RCMP intelligence, the sensitive task assigned to him and how senior officers allegedly refused to respond to allegations against him.

On April 1, 2013, the RCMP unveiled the NICC with 35 intelligence agents, analysts, and managers assigned to three areas: Convergence, Intelligence Priorities, and Coordination Team.

"Former Commissioner Bob Paulson tried to increase the 'security stance' within the RCMP to make it equal to their Five Eyes allies," the study said, referring to the Canadian, U.K., U.S., Australian and New Zealand alliance.

According to MacNeil's report, its mandate was to create a comprehensive intelligence framework that effectively defined emerging challenges, tactical opportunities and vulnerabilities while reducing risk of duplication."

At a three-day planning workshop in January 2014, Todd Shean, then assistant commissioner for federal police, said the center had a strong team inspired and ready to move the standards on intelligence."

When the NICC officer retired in February 2016, Shean picked Ortis to not only head the center but also "carry highside details," the report said.

Highside is another name for secret information derived from data shared by Canada's allies, including so-called "signals intelligence" acquired in foreign countries, and confidential information collected by human sources operating with Canada's allies.

"They were searching for someone to overhaul the software and start using highside details," the study said.

"Shean proposed Mr. Ortis took over the NICC and D/Commr. (Mike) Cabana felt it was a smart idea," says.

"A/Comr. Shean explained that having Mr. Ortis in charge of the NICC and integrating top-level information into the field of criminal intelligence would push NICC and RCMP intelligence to the next level.

Ortis joined RCMP as a civil member in 2007 after completing his PhD in cryptography and Asia at B.C University.

According to reports, before being tapped to lead the NICC, Ortis headed a small RCMP intelligence unit called Tactical Results (OR) in 2015, composed of eight to 12 members, including specialized academics.

Former deputy commissioner Mike Cabana told MacNeil that the tactical outcomes intelligence unit "was doing some great work under Ortis, and they were curious about the ability to better use highside in criminal investigations."

At the time, Paulson "had great interest in the role of civilians in the RCMP" and according to MacNeil's report, even proposed opening a civilian stream at the RCMP training academy.

"RCMP looked at other organisations including the Criminal Investigation Bureau and how they used people as representatives of their organisation," MacNeil wrote.

Senior RCMP officials required Ortis to incorporate "highside" details into the NICC, which wasn't done before.

Davis told Global News that she thought the RCMP was attempting to work out how to use such information to set big picture goals and identify areas for study. 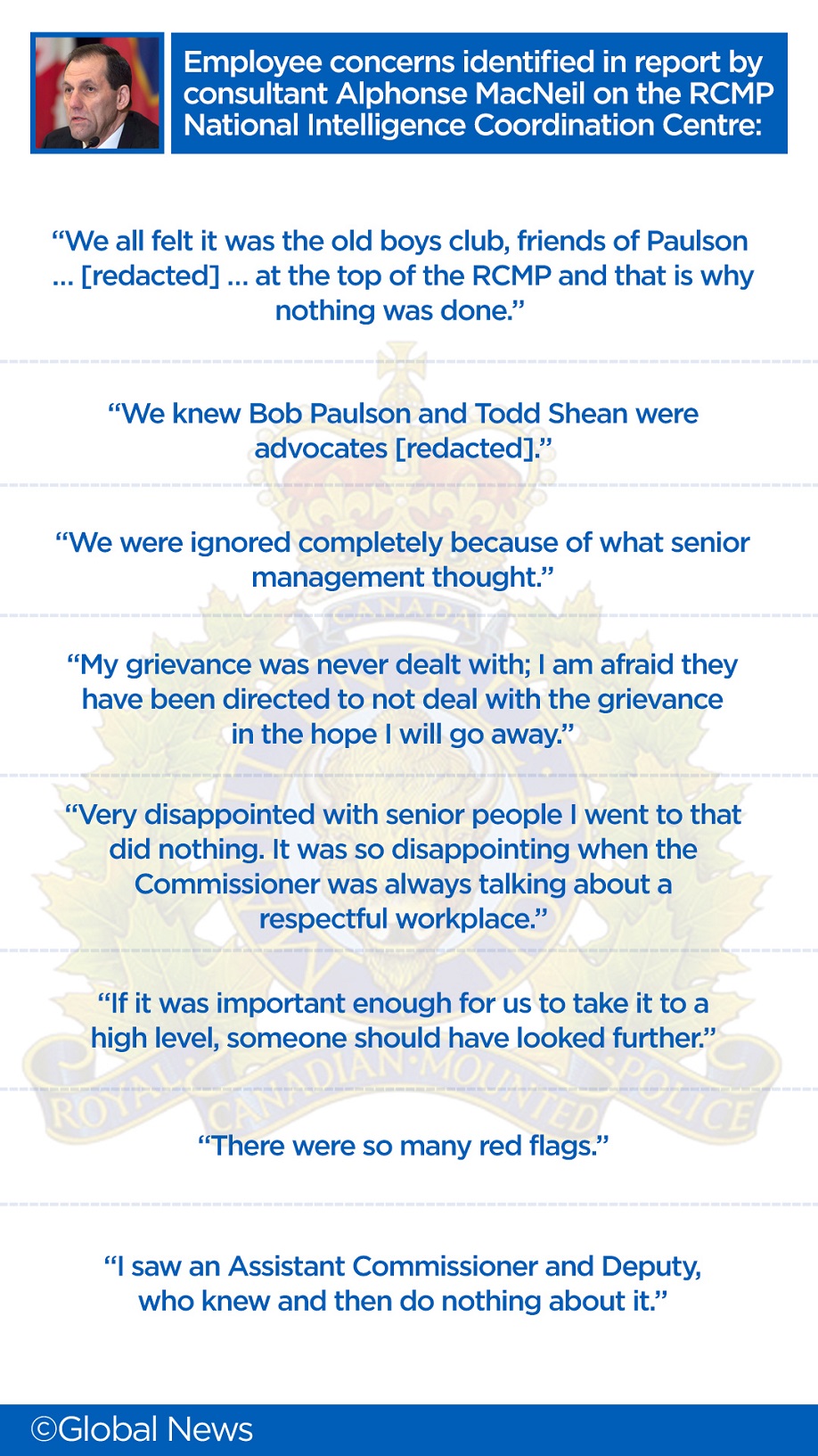 "Overall, what that could mean is that the organisation uses confidential or highside information to guide decisions and objectives — where the RCMP could steer inquiries," Davis said, who formerly worked for the Canadian Security Intelligence Service.

She said she would be shocked if the RCMP used highside to support individual prosecutions, as using information as testimony in Canadian courts is difficult.

Upon his arrival at the NICC in March 2016, Ortis "talked about turning the NICC into an all-source intelligence unit and offering analysts fresh and exciting training opportunities," the study said.

"It was well-received and analysts were anxious to operate.

"But early on, most senior observers claimed the NICC was no longer a respectful workplace compatible with the fundamental values of the RCMP and believed their sense of value had been degraded."

Just four months after Ortis took over, Supt. Marie-Claude Arsenault approached Shean, telling him that morale at the NICC was very low, and staff were not respected. They felt threatened their skills and schooling," the review said.

Shean ignored her complaints, telling her he "had to handle a Witness Protection abuse lawsuit and didn't want to handle another harassment complaint," the analysis said. He advised her to "watch things" and let him know if they didn't change.

In a civil suit filed in August, Dayna Young, an RCMP intelligence analyst since 2008, charged that Ortis said he didn't like her and considered her "garbage" work.

Another researcher, Michael Vladars, worked at the Privy Council Office and the Canada Border Services Department before joining the NICC, but Ortis claimed he had no intelligence comprehension" and wondered why he was still employed, the complaint claims.

Ortis insulted Francisco Chaves' jobs as "horrible" and "garbage," the suit alleges, adding that the intelligence boss was told he was "incapable of doing his duty," challenging his commitment to RCMP.

"The acts and inactions of the defendant not only resulted in his inability to shield the victims, but in his failure to recognize, interfere and deter the illegal activity of Mr. Ortis at an earlier point," the suit claims.

The government has not yet responded, and the accusations have not been confirmed. The RCMP said it was "committed to a safe, diverse and skilled workplace."

On Dec. 22, 2016, Arsenault again talked to Shean about the NICC, briefing him on the "demeaning, judgmental and condescending" behaviour towards staff and superiors, the review said. She said that's abuse.

A group of NICC workers gave Ortis a letter on Jan. 13, 2017, copying it to Shean and Arsenault. Instead, fearing to sign their names, they wrote they represented "a plurality of long-standing NICC intelligence analysts."

Shean, who is now the director of corporate security at JD Irving after retirement from the RCMP, told supervisors they "got paid to deal with the concerns and not go to him to fix their problems," the analysis said, summarizing Arsenault's account.

Paula Dionne succeeded Shean as assistant commissioner in May 2017 and obtained a copy of an employee-written follow-up letter.

"The letter suggested problems deteriorated from the first letter," the analysis concluded.

Meanwhile, RCMP sent a professional seeking to settle the workplace dispute between Ortis and staff. But the professional agreed to suspend these activities due to worries over revealing the workers. The crisis mediation specialist called it one of her toughest cases," the review found.

Aware of their fears, the NICC was "looking to leave," and probably the RCMP, the study said.

"We all thought it was the old boys club, Paulson's mates... on top of the RCMP and that's why nothing was done," he said. "My grievance has never been dealt with; I'm sure they've been guided not to deal with the grievance in the hope I'll quit."

Paulson did not respond to a request for comment regarding the conclusions of the MacNeil survey. But in September, he told Global News that although he was comfortable with Ortis and impressed with him, he never sheltered him from complaints.

"I remember that before his officially reported detention, I have no idea that he was accused of having committed these illegal acts or that he was managing poorly or that he was threatening or harassing others."

"I can't believe for a second that if someone had any information—or even a slight suspicion—about Cam's supposed illegal conduct they wouldn't have behaved instinctively and specifically to intercede."

But the study said senior RCMP officials below Paulson understood the NICC's issues.

Before heading to a new role, Arsenault met Dionne on June 15, 2017 to discuss NICC concerns, the study said.

"When A/Commr began debating morality in the NICC. Dionne said she didn't realize that the workers were confidential. She said, 'And they're CMs (civilian members) because RMs (regular members) wouldn't do that," the review said.

"She proceeded to call CMs too sensitive. Supt. Arsenault disagreed with her, believing that the meeting would not be fruitful. Supt. Arsenault continued to clarify the condition including derogatory and critical behaviour, intimidation, and fear of reprisal."

Arsenault followed up with an email to ensure Dionne was clear about what was going on. Yet Dionne said she was never copied on NICC abuse complaints," added the analysis paper.

"She knew Mr. Ortis was brought in to change NICC stuff. As she asked him about the letter from the analysts he said he was given an order to clean up the software and those workers ‘moved aside’ were upset.”

The then deputy commissioner, Gilles Michaud, felt NICC workers were in "revolt," the analysis noted.

“He claimed the problem was about improvements Mr. Ortis was attempting to make as he tried to up their capacity and some staff felt intimidated by the modern paradigm.”

When this was going on the RCMP actively attempted to find out who supposedly leaked classified information to the subject of an investigation that was arrested in Washington State, Vincent Ramos.

The file, called Phantom Safe, was considered a NICC win and a sign of its potential.

"Shean noted the NICC's performance... (edited) one of their most popular files was Phantom Stable. The NICC proved itself...and made inroads in determining operational objectives."

Deputy Commissioner Mike Duheme consulted with NICC staff in December, asking them to order an independent review. After hundreds of interviews, MacNeil submitted his May 11 paper.

The MacNeil report found that leadership deteriorated and RCMP policies were ineffective.

"In the NICC situation, leadership deficiency certainly affected morality and efficiency but most significantly, it had a lasting detrimental effect on workers that is still being felt today," he wrote.

Although the paper was partially edited, Global News interpreted quotations from the text relating to decisions taken "based on a need to make an organizational change that could lift the RCMP intelligence profile in the eyes of allies without acknowledging possible effects on employees."

Davis said the study posed a critical question: whether NICC employees' inability to manage complaints indicated a structural flaw in the RCMP, or whether Ortis was exceptional.

"This has an important consequence from my viewpoint, because if it's a systemic problem in the RCMP, it's obviously an operational concern," said Davis, chairman of Insight Threat Intelligence.

"But if Cameron Ortis was covered personally because of special connections he may have had with senior officials, it might be much more serious for me than systemic problems because it would probably have allowed him to participate in any of the suspected illegal acts for a much longer period of time, without some doubt being leveled against him."

His detention probably made it harder for NICC workers to do their jobs, she said.

"These kinds of inquiries are highly destructive, both from an internal moral standpoint... and then there is, of course, the regional disturbance in which allies can be more hesitant to exchange knowledge and intelligence with the RCMP."