The man who beheaded a teacher in a street in France waited outside the school and asked pupils to describe his target, officials claim.

The man then shared pictures of the dead victim Samuel Paty, 47, who showed his students notorious Prophet Muhammad cartoons.

Before being shot dead, the attacker fired an airgun at officers.

Nine individuals have been investigated over alleged links to Islamic terrorism.

The assault took place at approximately 17:00 (15:00 GMT) on Friday near the College du Bois d'Aulne, where Mr Paty taught in Conflans-Sainte-Honorine, about 30 km (20 miles) northwest of central Paris.

President Emmanuel Macron said the incident bore all the hallmarks of a "Islamic jihadist incident," and the teacher was killed because he "did free speech."

A national salute to Mr. Paty.

He called the perpetrator Abdoulakh A. -- An 18-year-old Chechen-born Moscow man. He came to France as a child and was unknown to the anti-terrorism police.

He lived in Évreux, Normandy, about 100 km (62 miles) from the murder scene and had no clear connection with the teacher or school.

The guy appeared in court but on minor misdemeanor charges.

He went to college on Friday afternoon, telling students to point the teacher out, Mr Ricard said.

The attacker pursued Mr Paty on foot after school, inflicted several wounds with a knife on the head and then beheaded the victim.

Testimonies are said to have heard the perpetrator yell "Allahu Akbar," or "God is best."

The man then shared the victim's pictures on a Twitter account, along with insulting Mr Macron and French "infidels" and "dogs."

As police pursued him, he shot bullets from police airgun, Mr Ricard said.

They've returned fire. The defendant managed to stand up and was shot again, hit nine times.

Mr Ricard said Mr Paty was the subject of threats when he exposed Prophet Muhammad's cartoons during a freedom of expression class, in reference to Charlie Hebdo 's situation.

The French satire magazine suffered a fatal assault in 2015 after publishing cartoons. A lawsuit is pending over the attack.

A history and geography specialist, Mr Paty told Muslim students to look away if they felt they could be offended.

A pupil's parent responded aggressively to the incident, accusing Mr Paty of displaying nude pictures of Prophet Muhammad. The father lodged a formal complaint and produced videos showing the outrage over Mr Paty 's actions and asking people to go to school and demonstrate.

Father is one of the persons in detention, Mr Ricard said, adding that this man's half-sister joined the Syrian Islamic State organization in 2014.

Anti-terrorism officers knew at least one of the other suspects arrested, he said, investigating other connections.

And at least four are the attacker's family.

Teachers across France told journalists of their terror, shocked by attacking a colleague murdered in a quiet suburban street at broad daylight.

Besides this killing 's terror, there's still strong symbolism. Education minister said the root of what happened was "Republic hate."

The dissemination of French national values — liberty, freedom, fraternity — is seen as a central role of the education system.

Three weeks after an attack on Charlie Hebdo 's former offices, this new killing is just another evidence of the fault lines over secularism and liberalism that left blood on the country's streets.

How does France react?

Students were said to be distracted by a well-liked teacher's vicious assassination. One father wrote on Twitter that his daughter "is in bits, terrorized by the violence of such an act.

One of Mr Paty's former students, Martial, 16, said he liked his job: "He tried to show us something-we had debates occasionally."

The French presidency said Mr Paty will receive a national tribute, and the hashtag # JeSuisSamuel (I am Samuel) started circulating social media, echoing the # JeSuisCharlie appeal for unity after Charlie Hebdo 's attack.

Speaking at the scene hours after the attack, Macron emphasized national solidarity. "They won't win, not divide us," he added.

Charlie Hebdo tweeted Friday: "Intolerance has hit a new threshold and appears to hesitate at nothing to inflict fear in our world."

Minister of Education Jean-Michel Blanquer, who met with representatives of teaching unions on Saturday, said in a reported statement that Mr Paty was killed by the "enemies of democracy" and that France would "never recover when faced by fear, coercion."

In a statement, the Strasbourg Assembly of Chechens in Europe said: "Like all French citizens, this event horrifies our culture." 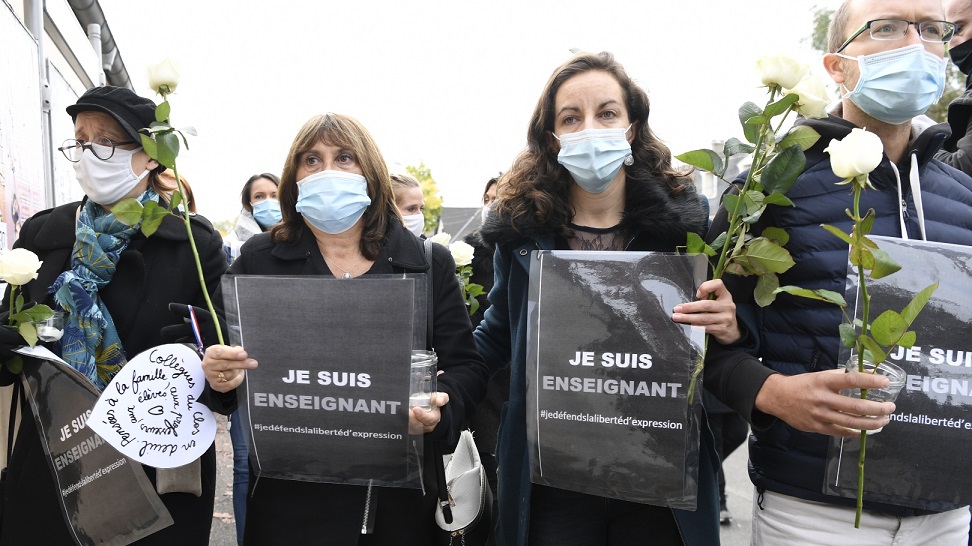