The 37-year-old stated that he wishes to raise his children 'without looking over my shoulder.'

The 37-year-old was escorted to the Haldimand County OPP detachment by a caravan of honking supporters Wednesday morning.

Williams stated prior to entering the station that his decision to surrender was not part of any deal to initiate discussions with the provincial and federal governments regarding the occupation of McKenzie Meadows, a proposed housing development.

"This is me spending ten months with outstanding warrants," he explained.

"I am the father of four children. I need to be able to look after my children without looking back."

The member of the Six Nations of the Grand River has been designated as the spokesperson for 1492 Land Back Lane. McKenize Meadows was given that name by demonstrators when they began occupying it on July 19, 2020, claiming it is unceded Haudenosaunee territory.

Blockades were erected across area roads in the months that followed, as were court injunctions ordering people to vacate the area and dozens of arrests. Over 300 days have passed since the demonstrators took up residence on the land.

Williams said he was charged with mischief and disobeying a court order. He said OPP officers fingerprinted and photographed him before releasing him roughly half an hour later on the condition that he attend court and not return to 1535 Mackenzie Rd., the location of 1492 Land Back Lane.

Provincial police confirmed in a press release that Williams was wanted on two warrants. He is charged with mischief and disobeying a court order on two counts each, as well as intimidation and failing to comply with an undertaking.

Williams told reporters that he hopes to complete the criminal court process as quickly as possible and that he intends to continue advocating for the camp and Haudenosaunee land rights.

In October, Ontario Justice R.J. Harper ordered Williams to pay $117,814.18 to Foxgate Development and $50,349 to Haldimand County to cover legal fees incurred by both parties while seeking injunctions against the camp and road blocks in the county. 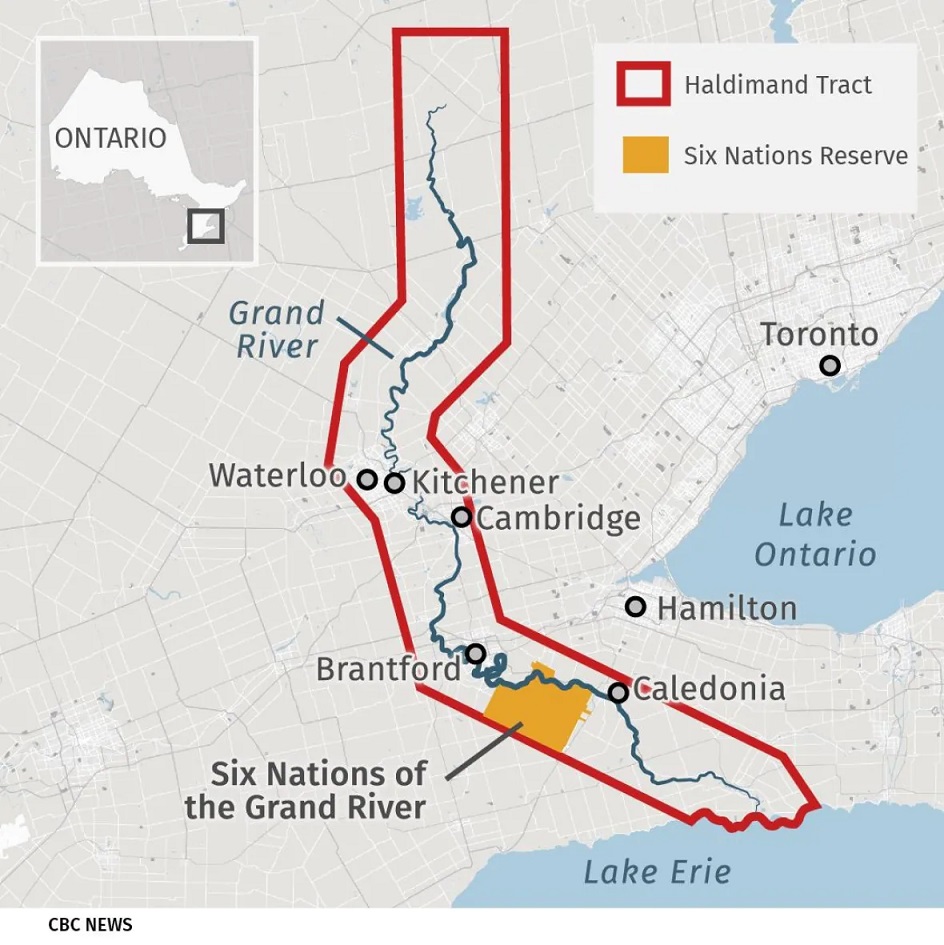 In his October ruling, Harper stated that Williams was the "leader" of 1492 Land Back Lane, citing his social media posts and videos shared since the camp and demonstration began.

Williams maintained throughout his court appearances that he was not the camp's leader, claiming the camp operates as a collective and makes decisions through meetings.

Near the end of November, members of the reclamation camp appealed the two court injunctions.

"We chose to participate in a process, one that is not our own, in order to attempt to move it forward," Williams stated at the time. "For us, the land issue here is still before the courts and unquestionably requires a nation-to-nation discussion."

Since 1492 Land Back Lane began, Williams has pushed for a nation-to-nation discussion about development and Six Nations land.

The site is located within the Haldimand Tract, which stretches approximately ten kilometers on either side of the Grand River and was granted to Six Nations in 1784 in exchange for their allegiance to the British during the American Revolution.

Foxgate, a joint venture between Losani and Ballantry Homes, maintains that the land on which McKenzie Meadows was to be built was legally acquired.

In Ontario Superior Court, the company filed a statement of claim seeking $200 million in damages. The province, the Attorney General of Canada, the Ontario Provincial Police, as well as individual Indigenous demonstrators and supporters, are all named.

Williams demands the dismissal of all charges.

Williams stated on Wednesday that he is unaware of any meetings between representatives of the Six Nations and the provincial or federal governments.

He urged the dismissal of all charges against those involved in 1492 Land Back Lane.

"These governments, courts, and police continue to debate what reconciliation looks like and means," he explained.

"Certainly criminalizing 50 land defenders for occupying their legally acquired lands... this is what reconciliation looks like, if you can let go of all of that."

Williams was present when the Haudenosaunee Confederacy Chiefs Council, Six Nations' traditional government, announced a moratorium on development in the tract last month.

Elected Chief Mark Hill of the Six Nations has also expressed support for the call to halt construction without the Haudenosaunee's consent.

Williams stated that after leaving the police detachment on Wednesday, he intended to eat lunch by the Grand River in Caledonia.

"I'm going to recall the reason we've been fighting all this time."

Skyler Williams, spokesman of the 1492 Land Back Lane occupation on disputed Haudenosaunee territory, said warrants have been hanging over his head since 2020 and he would like to get the judicial process rolling because his family needs him.
Tags
Canada