By Roni Sianturi, 25 November, 2020
Police say a student is in custody and another has been taken to the hospital following a shooting at Hendersonville Middle School.

The 12-year-old boy arrested in connection with a classmate's shooting on Tuesday morning was charged with felony assault with a deadly weapon and carrying a weapon to the Hendersonville Middle School, police said around 5:30 p.m.

A school administrator immediately detained the boy after he allegedly shot his classmate in a gym where about 35 students were clustered at 7:45 a.m. The kid, also 12, was taken to treat Mission HCA. The gunman was in custody of investigators at Hendersonville Police Station, Police Chief Bill Hollingshed said Tuesday morning at 11:30 in a news conference outside campus, before being charged several hours later.

Both students were excluded from campus by 11:30 a.m. The victim was listed at Mission HCA in Asheville, Hollingshed said. Hospital reported the girl's OK.

"Our patient from the event at Hendersonville Middle School is in good stable condition and resting comfortably," Mission spokeswoman Nancy Lindell said. "Her family requests privacy at this time."

"As soon as the incident occurred they had administrators on the scene very very quickly," he said. "They were able to secure the firearm and the individual involved. Our SRO and about four other officers were here within the first minute."

Superintendent John Bryant also thanked lawyers and school employees for their response "on the type of day that you simply do not want to have to prepare for."

"We had a staff that responded immediately, students who responded responsibly and immediately and law enforcement partners that knew how to immediately support that work," he said. 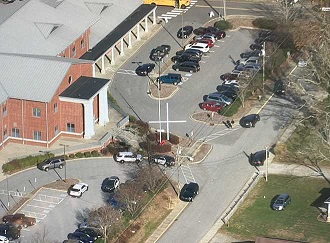 Hollingshed would not describe the type of weapon the boy shot, but confirmed—despite social media reports that it wasn't a real firearm"—that it was a weapon capable of killing anyone. Around 35 people were in the gym during the incident, the chief said.

Upon the shooting, administrators alerted school staff and parents to an urgent red lockout code, Bryant said. The school ratcheted down to a code yellow until the 12-year-old gunman was arrested and the weapon confiscated. Investigators "are going through witness statements and every single student and faculty member that was inside that gym as well as others to determine just what the intent was of that student," Hollingshed said. Law officers looked at students' social media to seek a motive.

HMS lacks metal detectors. It does have security cameras in some places, Bryant said but "ultimately we recognize that the most significant security we can put into place is our personal vigilance, the adults who are present in the space, students who are observing what's taking place, reporting concerns to adults and staff members being where they need to be."

"We want out schools to be safe places," he said when asked about metal detectors. "We'll evaluate all our protocols."

Charges facing the 12-year-old in custody depend on what led up to the shooting, what the motive was, whether it was intentional, all that type of thing," Hollingshed said before those charges were brought later that day. Investigators look at how the boy got to school, how the weapon was hidden, and other info. The boy was released into custody of juvenile services after being charged with assault with a deadly weapon intended to kill, cause serious injury, and carry the gun to campus, the city said in the news release.

Bryant stressed the school system was prepared to advise those seeking assistance.

"Anytime you go through a crisis situation, you want to recognize that we all process that differently, so it's critical that everybody understand that we're able to support our students and our school community as they respond to that."

While schools are now out for Thanksgiving until Monday, students and families can get help using an anonymous reporting system that allows them to reach out directly to school administrative staff 24 hours a day seven days a week anytime that a child has a need or response," Bryant said. "Even though we're closed for the holidays, we make ourselves available to our students in such a way that we might be able to provide care for them if that need arises."

Police and school officials announced the shooting in their statement at 10 a.m.

Around 7:45 a.m. "the Hendersonville Police Department responded to an incident involving a firearm on the campus of Hendersonville Middle School," they said in a joint press release. "A student discharged a firearm on campus, wounding another student. The juvenile suspect was immediately detained by a school administrator."

"Henderson County Public School officials immediately implemented a Code Red lockdown to protect the school campus, which was soon downgraded to a Code Yellow after the suspect was arrested and the scene secured. The 12-year-old student who was shot in the leg was transported by ambulance to Mission Hospital.

"The school will begin dismissal while remaining under protective lockdown. Busses dismiss at 10:15 a.m. And car riders dismiss at 10:30 a.m. Their administrators contact school families with detailed procedures."

"We want to highlight the swift response provided by school administrators, the HMS School Resource Officer, local law enforcement and first responders who quickly secured the scene," said the release.

The student is currently being held with juvenile services
Tags
Crime