Manslaughter indictment for officer charged with shooting man in the back

An Oklahoma City police sergeant unnecessarily fired three shots at a man as he was running away, officials said.

An Oklahoma City police sergeant who shot a man in the back three times as he ran away last December was charged with manslaughter on Thursday.

The shooting by Sgt. Clifford Holman, 36, who is white, of the man, Bennie Edwards, 60, who was Black, was partially captured on video and touched off city protests. Mr. Edwards had struggled with mental illness and, The Oklahoman reported, the officers who faced him did not have crisis intervention certification.

"In determining whether or not the use of deadly force by an officer is lawfully justified or not, there are always many things to consider," the district attorney for Oklahoma County, David W. Prater, said in announcing the case against Sergeant Holman, according to The Associated Press. "Any loss of human life is tragic, and I very seriously take these decisions."

An affidavit from a homicide detective who investigated the matter, Bryn Carter, accompanied Mr. Prater's charging document and described the events leading to the death of Mr. Edwards.

The police received a call on Dec. 11 about a man disturbing clients near a store. The first officer to arrive found a man near a pawnshop, Mr. Edwards. Mr. Edwards opened a folding knife he had in his right hand when the officer approached and, according to the affidavit, began telling the officer to leave. 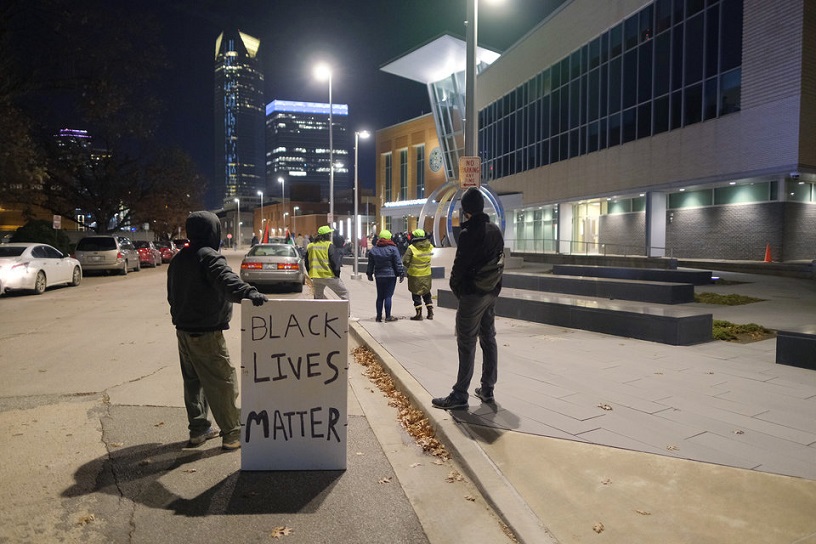 Sgt. Keith A. Duroy, the officer, called for backup and specifically requested a unit with a Taser. Sergeant Holman, the department's seven-year veteran and a certified Taser operator, soon arrived.

Mr. Edwards charged Sergeant Duroy with the knife at some point after the second use of the Taser, before he changed directions and began to "run away from officers," the affidavit said. That was when Sergeant Holman dropped his Taser, drew his gun, "and unnecessarily fired three shots at Mr. Edwards as he ran away, hitting him in his upper middle back, causing him to die," it said.

In a statement on Thursday evening, Kyle Sweet, a lawyer representing Sergeant Holman, said, "We respect the heartbreak suffered by Mr. Edwards' family, but we are convinced that Sergeant Holman acted lawfully, and we are proud to represent him as we fight these charges in court."

The latest police officer in Oklahoma County to be charged by Mr. Prater following a fatal shooting is Sergeant Holman.

Chance Avery, a police department corporal in The Village, Okla., was charged with manslaughter last year for shooting a man wielding a baseball bat, KFOR, a TV station, reported. That trial is in progress.