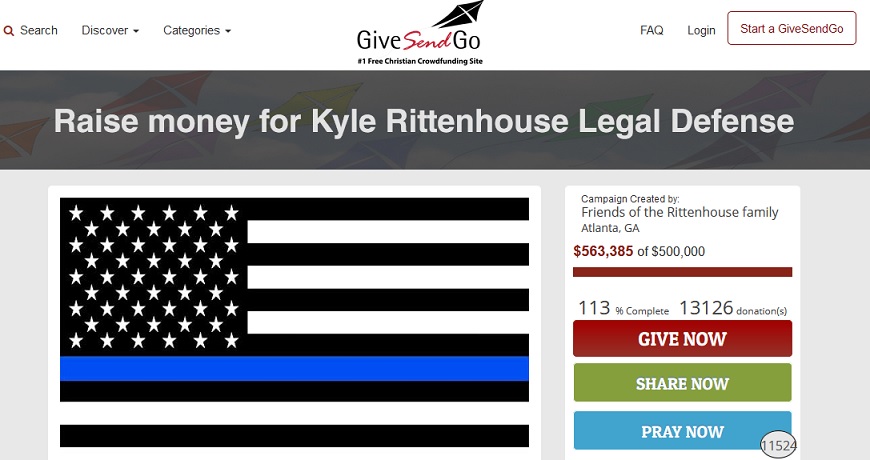 A fundraiser on GiveSendGo 's Christian fundraising platform says it raised more than $390,000 for Rittenhouse, while one of the teen's attorneys, Lin Wood, said on Twitter on Monday night that more than 11,000 people had donated a total of $605,550 to the FightBack Foundation, which says its goal is "to bring lawsuits to stop the radical left 's lies and smears" and provides motivation.

Last week, John Pierce said he would defend Rittenhouse alongside local attorneys in an announcement that coincided with FightBack 's launch with Wood.

"The radical left has taken over mainstream media, and they don't care about truth," said FightBack on his website. "They can cheat, cancel, and defame anybody who gets in their path. But the fact always matters. That's why we're taking litigation to combat the propaganda of the left. Protecting the truth. Defending democracy."

Meanwhile, the GiveSendGo fundraiser 's founder was known as a person called "Rob."

GiveSendGo's fundraiser said it was in contact with Pierce about the funds raised. Insider was unable to check that the GiveSendGo fundraiser was in touch with Rittenhouse 's lawyers. Attorneys did not immediately respond to a confirmation request.

"Kyle now faces the wrath of those who would see us stripped of our God-given rights and reduced to servitude," says an update on the GiveSendGo page. "Kyle will definitely need large sums of cash to post bail; that's why this fundraiser will proceed. His achievement is our success; his defeat, the lack of our right of self-defense. I strongly believe Kyle will be released with the continued help of all of you fine people."

It's unknown how much FightBack raised between Monday and Thursday. The classification of the charity as a 501-c(4) non-profit social benefit corporation precludes reporting who contributed to it.

"We believe that average citizens will give what they can to help this boy despite troubling times," Wood said on Twitter. "They're America's Freedom Loving & Backbone."