It was unlikely to succeed, and it didn’t. But the decision on 12 December by Chile’s lower chamber of congress to throw out an attempt to impeach President Sebastián Piñera shows that he is still under pressure and struggling to find a way through the country’s social and political storm. Andrés Chadwick, Piñera’s former interior minister, was not as fortunate: he was censured a day earlier and banned from holding public office for five years. 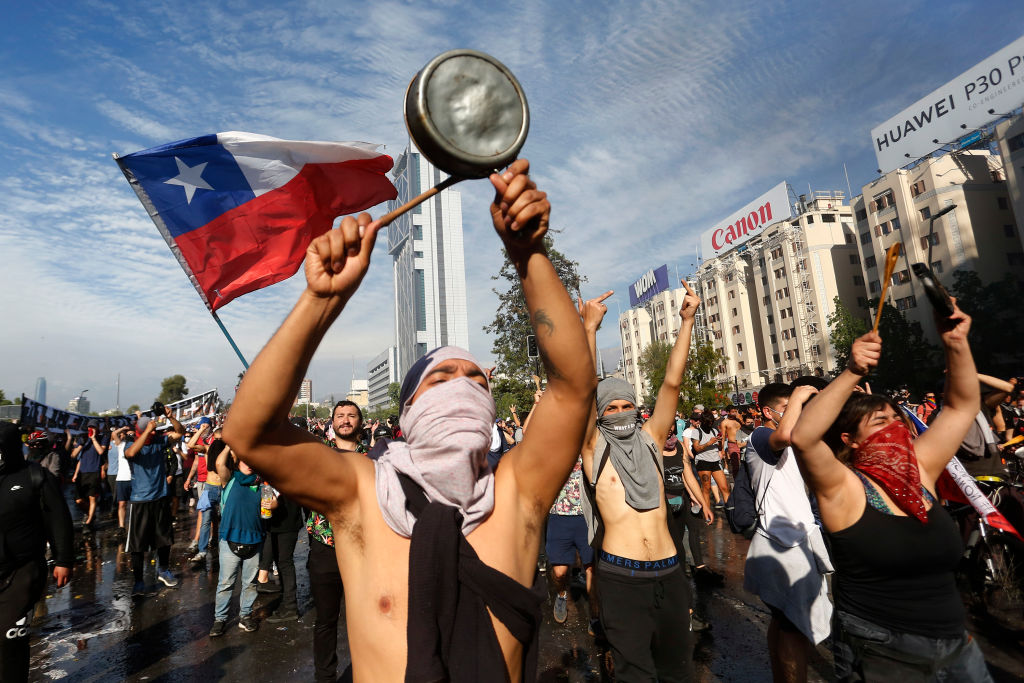 These are not normal times in Chile. The wave of protests surging around the country has reached the two-month mark. Despite making or promising a series of concessions, including a constitutional referendum next April, the government remains on the back foot. Last week it faced two political attacks, one directed at Chadwick, President Piñera’s cousin (he stepped down in October, 10 days after the protests began), and the other at Piñera himself.

The attack on Chadwick hit its target. After a marathon 12-hour session on 11 December, senators voted by 23-18 to censure the former minister, finding that he violated the constitution by failing to prevent human rights abuses by the security forces, as well as by failing to maintain public order in the days after the protests broke out on 18 October. As a result, Chadwick has been banned from holding public office for five years.

Passing the censure motion required – and achieved – simple majorities in both houses of congress. Chadwick rejected the charge of violating the constitution which he described as “unfair, unfounded, and politicised”. The vote split largely down party lines with the centre-left opposition parties winning the day. Chadwick has always been a close associate of Piñera (he was secretary general to the government [2011-2012] and interior minister [2012-2014] during his first term in office), so the vote against him was at least also a symbolic blow against the president.

However, the attack on Piñera was off target. The bar for impeachment is set higher. The lower chamber must decide (by simple majority) whether there is a case to answer, and if it does reach that conclusion the president faces trial in the senate where a two-thirds majority is required to convict. In the event, impeachment did not clear the first hurdle. The lower chamber voted by 79 to 73 to reject the case for impeachment, which was also based on Piñera’s alleged responsibilities for human rights violations. Here too the vote was on party lines, although some centrist deputies from the Partido Radical (PR) and Democracia Cristiana (DC) broke ranks to vote with the pro-government coalition.

It is hard, however, for government supporters to present the failure of the impeachment process as a significant victory. This was the first attempt to impeach a President in over 60 years (the last time an attempt was made was against President Carlos Ibáñez del Campo in 1956). Meanwhile, Piñera’s popularity ratings have plummeted to 10%, the lowest recorded by any Chilean president since the restoration of democracy in 1990.

Chileans were asked to express an early view on the constitutional crisis on 15 December. The exercise was organised by the country’s municipal association (Asociación Chilena de Municipalidades – AChM). A poll was held in over 220 of the country’s 346 municipalities or communes. The poll was organised on a voluntary commune-by-commune basis and was open to everyone aged 14 or over. Some 2.1m people voted, out of a total population of 18m. Planning for the poll began after the outbreak of mass protests in October; the idea was dropped when the national government agreed to hold a plebiscite on reforming the constitution, scheduled for next April, but was subsequently re-instated.

Voters were asked to fill out three ballot forms. The first asked whether they wanted a new constitution, and if so whether they favoured it being written by a citizen’s assembly, or by a mixed assembly formed by members of congress and citizens. In second place voters were asked to identify their top three citizen demands, from a list that includes education, health, pensions, housing, the environment, and basic services. The third form was reserved for local issues relating specifically to each commune. AChM said the aim was to take the pulse of public opinion in a non-binding manner.

Lucia Dammert, a political analyst with think-tank Espacio Público said there is still deep-seated anger and simmering divisions in Chilean society, and that the government “should take advantage of this decision to promote reforms”. With many of the protests organised by grassroots social movements, rather than by the opposition political parties, it may also be the case that the latter are not yet able to present a credible political alternative.